skip to main | skip to sidebar

"Sweepstake" at work, trying to predicate the date of birth

Earlier this afternoon the sky outside our house was filled by a huge flock of gulls. From what we could see they were all black headed gulls, probably with quite a range of ages but that was a little difficult to tell from down here.

We've no idea where they all came from as there must have been hundreds of them circling around the sky at both the front and back of the house. We normally have a fair few swifts up there this time of year but they all seemed to disappear while the gull invasion was in full effect. Even the usually brazen starlings made themselves scarce.

After about half an hour they'd all but moved on - love to know why they visited, it was quite spectacular.
Posted by MikieB at 2:13 pm No comments:

Okay this one was a little bit freaky, even for a Friday.

It came to the end of the day at work and we were about to leave the office when someone remarked that there were hundreds of tiny little frogs hopping about the car park.

Now to see a frog outside the office wouldn't normally be that strange given that there is a large pond just beyond the car park and we're in the middle of the countryside, but when we actually got outside the path leading to the front door of the office was covered with the wee froglets. Not just the path either, the whole car park seemed to be covered with little jumping guys, making it seem like the gravel was moving.

For some reason most of us did our very best not to step on them as we made our way to the car, which took quite a bit of concentration ... not that it helped them too much when we drove off home causing a mini froglet massacre under the tyres of our respective cars.

Maybe they were trying to make an escape from the pond as I was lucky to see a kingfisher had decided to visit it, possibly not so lucky for them tiny guys. 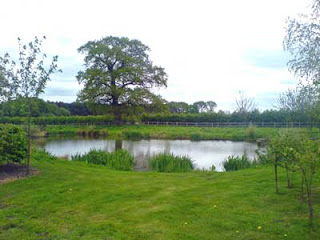 I do really love this time of year, it's like the whole countryside, village gardens and town parks have finally woken with life appearing seemingly at every new turn.

This lunchtime I watched the first swallows of the season I'd noticed return to the sky and buildings of my place of work. There were at least two swooping out from the farm buildings converted into offices, then across the small gravel car park to circle the pond then back again.
I'm hoping they may decide to nest close by, though they may just have been passing through on their way to their annual summer homes.

Last year we had quite a few highlights in the natural world to observe; a slightly confused deer on side of the A1(m) / A64 junction,
sights of red squirrel up at Whinfell Center Parcs,
two tiny but loud baby wrens in the bushes at the back of our garden,
and the magical hummingbird moths in Menorca.

As always I'll be keeping my eyes open and hoping for some more fantastic sights this extra special year.
Posted by MikieB at 11:39 pm No comments:

Just for a change I had a bit of a first this last week. It was Easter Monday morning, not too early but early enough for a Bank Holiday. I'd gone downstairs to put some coffee on (love my coffee machine) for breakfast and as I went into the kitchen glanced through the window into the garden.

Now we've a little bird feeding set up in the back garden, a rickety wooden bird table (well I did assemble it myself), a suspended feeder and water dish with which we hope to attract allsorts of exotic and unusual bird life, though normally we have to make do with starlings and sparrows with the odd appearance of greenfinches and the like.

However, on this particular morning the table was quiet and so too was the rest of the garden. Then, as I drew closer to the window, I could see why … on the middle of the lawn, hopping about with her attention centred on one little bush next to the right hand fence was a sparrowhawk. It looked a lot like she had lost some prey round the back or underneath the bush by the way she didn’t seem to notice me, and her movement from one side of the bush to the other. She may have been a mostly brown feathered creature, but the white stripe over her glaring yellow eye gave her something of an evil appearance, certainly not a bird to mess with.

I quietly moved back into the living room to get my mobile phone hoping to be able to get a photo of the unusual visitor. Once I’d located the phone and switched to camera mode I then went back into the kitchen – she was still there, but looking a little confused as whatever she thought there was under the bush was not making its presence know (can’t say I blame them really). I made it to the kitchen window, but just as I was lining up the shot she spied me and with a few beats of her wings was away at some great speed.

I went out into the garden, but could see no sign of the bird making its escape and nothing appeared to be under the bush either. So far I’ve not seen any return to our little garden of the sparrowhawk. 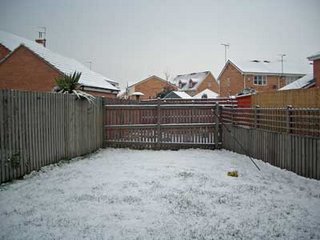 Thank goodness it wasn't like this yesterday. Yeah, I know it's not really all that snowy by other peoples standards but it's bound to cause us English type folk a few problems - very pretty though.
Just came back yesterday from a lovely weekend with my girlfriend down at Center Parcs, Sherwood Forest. We stayed in villa 199 which I'd recommened to any couple wanting a fairly quiet time away, but close to most of the main attractions not to need hiking boots. One highlight would have to be the wildlife found just outside the villa's patio doors, including grey squirrels, rabbits, mallard ducks, moorhens, blue, longtailed and great tits, chaffinches and even a little goldcrest - fantastic! It was so great to have all that wild(ish) life outside our door, though we could have done without the scary mute swan pair which came right up to the glass of the patio and started knocking on the glass with their bills.
Really looking forward to going again, though we'll probably try the one up in Whinfell Forest, Cumbria next time just to see our elusive native red squirrels.
Posted by MikieB at 9:40 am No comments:

More wildlife spotting, again at night, around 11:30pm - who needs to get up at 6 in the morning when all the wildlife will come to you? So anyway, I was driving back from my girlfriends place last night, and just as I was approaching the ring road I did spy a little frog hoping its merry way over the road.
How it managed to make it to the other side I have no idea, as there was a car in front of me which the frog just seemed to jump out from underneath, without a care in the world. And me being of the geeky variety could only think of that classic video game Frogger. I hope the little guy got to where he was going.

Posted by MikieB at 1:40 pm No comments: